New York. The Big Apple. The first thing you need to know is that when you talk about “New York,” a large majority of people will assume you mean New York City. It’s just the way it is, even though the city takes up only 304 square miles of the state’s 54,000.

Unlike New York City’s concrete and steel, New York State is a natural wonderland with the Appalachian and Adirondack mountain ranges, the Hudson and Mohawk river valleys, the expanses of forest and farmland. New York claims two of the Great Lakes, the Thousand Island archipelago in the St. Lawrence River, the majestic Niagara Falls, and the long, thin Finger Lakes.

New York has a history of social reform. It outlawed slavery in 1827 and hence was a major station of the Underground Railroad. The Women’s Rights Movement was born in Seneca Falls in 1848 and from 1892 until 1954, Ellis Island in the Upper New York Bay was the portal through which 12 million immigrants found themselves safe from the oppression, war, poverty, famine, and religious persecution that they had escaped. 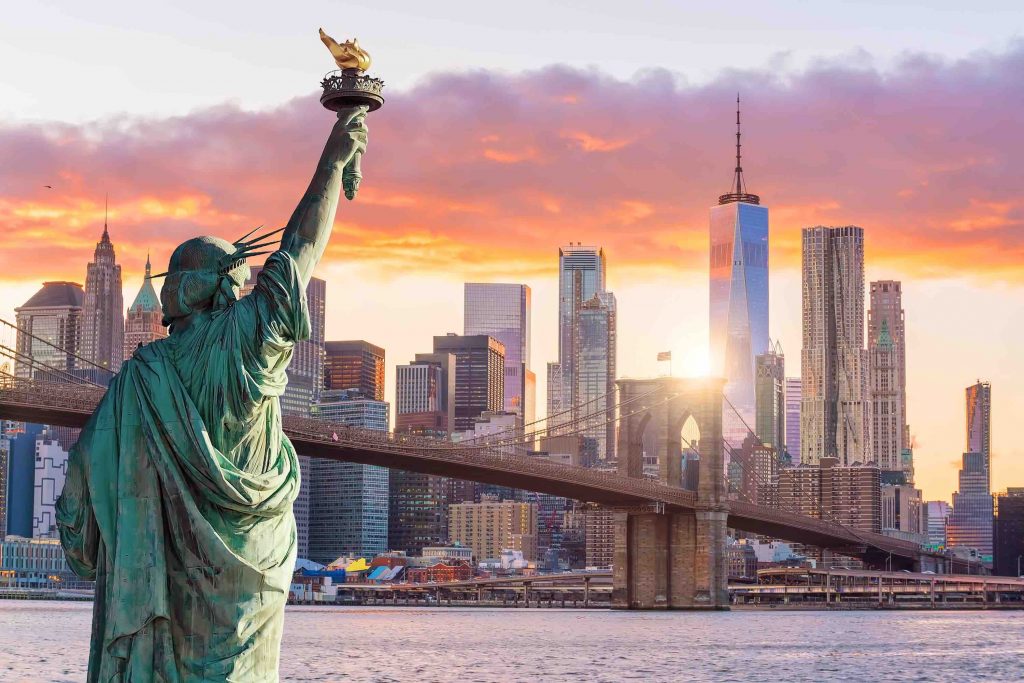 Hobart is a tiny hamlet located in northeastern New York. It is known for its six independent bookstores. Each store specializes in a specific genre of books. Huge book sales on the weekends of Memorial Day and Thanksgiving and the Winter Respite Lecture Series ensure there are visitors year-round. On the weekend after Labor Day, the Annual Festival of Women Writers draws thousands to the hamlet that has fewer than 500 permanent residents.

Lake Placid in the Adirondack Mountains is a village named for the nearby lake. Twice host to the Olympic Winter Games, the village is known for the best skiing on the East Coast. Hike in the Adirondacks, go horseback riding or sail or skim across the lake. Among the breathtaking scenery, you’ll find the most charming shops: upscale boutiques, curious tchotchke shops and galleries of local artwork.

Lily Dale is a hamlet in southwestern New York. The town was incorporated in 1879 as a meeting ground for Spiritualists (believers in the ability to interact with the dead) and Freethinkers (atheists, agnostics and rationalists). Visit the Healing Temple and the Fox Cottage Meditation Garden and stroll along the Fairy Trail: a meandering path through the forest with hundreds of tiny homes built by Lily Dale residents for the fairies and gnomes.

Yes, they are named after their birthplace, not the animals that once roamed the wild west. Buffalo wings are unbreaded chicken wings deep fried and coated in a vinegar-based cayenne hot-sauce. The Anchor Bar invented the wings in 1964. The Super Bowl began in 1967. A match made in culinary heaven. They come from Buffalo in upstate New York, a classic example of a town not really considered a part of the Big Apple.

German immigrants brought the grape pie to the Finger Lakes region. Today, it is made with the Concord grapes grown in the vineyards of western New York. Imagine grape jelly baked into a double crust—but better than that.

Irish immigrants settled in the Syracuse area and worked the salt mines. Lunch was typically small unpeeled potatoes boiled in the “free-flowing” salt brine. Today, bite-sized potatoes with skins intact are boiled in a lot of salt) and brushed with melted butter. The result is creamy potatoes with butter-flavored, lightly salted skin.

Utica’s Italian-American community gets credit for the tomato pie with its thick, chewy crust. Don’t let anyone catch you calling it pizza! The pie is made from yeast dough covered with red sauce, sometimes sprinkled with Parmesan cheese or brushed with basil olive oil or topped with caramelized onions and olives.

New York City has some of the most noteworthy landmarks in the world: The Statue of Liberty, The Empire State Building, Grand Central Terminal, and Wall Street. The landmarks in New York State are no less interesting. Lucky for you, the New York Travel Guide is here to break them down.

In 1900, George C. Boldt, owner of the Waldorf-Astoria in New York City, set out to re-create a Rhineland castle on Heart Island as a tribute to his beloved wife, Louise. Sadly, Louise died a few months before construction was completed. Heartbroken, George abandoned his project, and the property sat vacant until 1977 when the million-dollar restoration began.

The fort is one of the most significant places in U.S. history, including as the site of the first American victory of the Revolutionary War.  See reenactments that bring history to life. There are also beautiful gardens to wander and boat cruises.

Seneca Falls hosted the first Convention on Women’s Rights in 1848. Visit the Women’s Rights National Historical Park and the Seneca Museum of Waterways, tour the local wineries and simply soak in the incredible beauty of the Finger Lakes and Central New York. 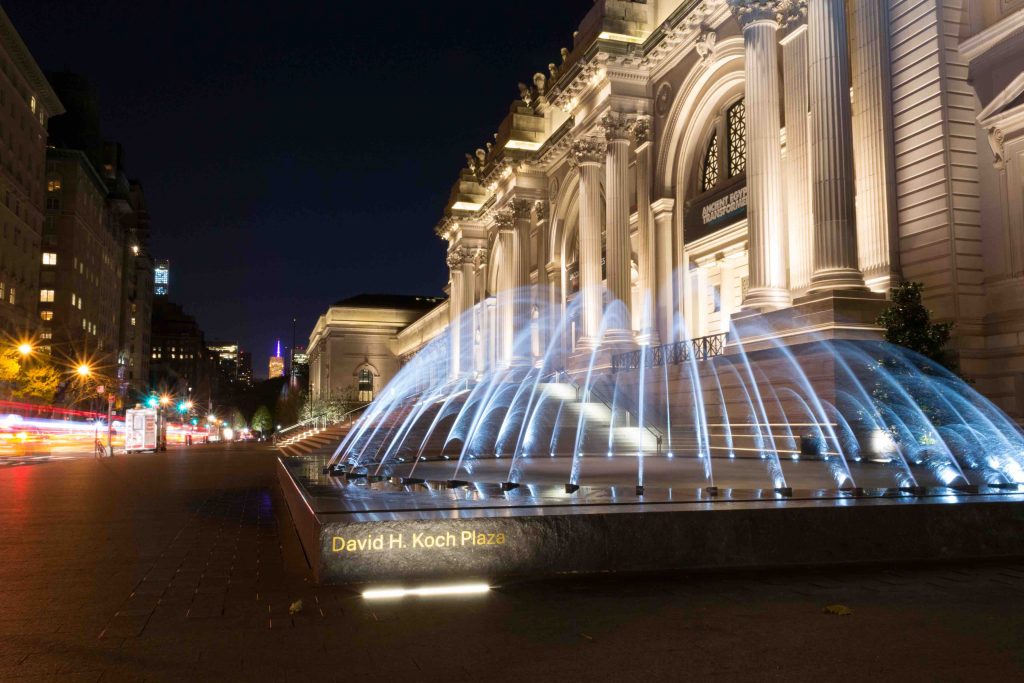 Depending on whom you ask, there are 83 museums in New York City or maybe there are 100. What we know for sure is that there are a lot: The Met, the Museum of Modern Art (MOMA) and the Guggenheim are the most noteworthy among them.

In Mountainville, about an hour north of New York City, the Storm King Art Center has more than 100 works of sculpture displayed outdoors on its 500 acres. The Buffalo Museum of Science is equally educational and entertaining. Rochester has the National Museum of Play—more toys of more types than anywhere. Children can play in their favorite fairy tales and explore an indoor butterfly garden. Parents can revisit their childhood toys in the National Toy Hall of Fame.

This might be the most important part of the New York Travel Guide. Everyone knows the Big Apple for their theater. New York City has Broadway and Off-Broadway–the crème de la crème of the dramatic arts–and the revered Metropolitan Opera.

Each June, the Chinese and Jewish communities on the Lower East Side of New York City celebrate the Egg Rolls and Egg Creams Festival. The cross-cultural activities include Chinese opera and klezmer, the traditional music of Eastern European Jews, and lessons in the Yiddish and Chinese languages, mahjong and the scribal arts. Both cultures present their traditional foods and folk arts.

In mid-May, over three days, the Albany Tulip Festival celebrates the region’s Dutch heritage with displays of more than 200,000 tulips. Activities include the crowning of the Tulip Queen and the Royal Tulip Ball, as well as music of all genres, food, arts and crafts and, as a result, lots of fun for the children.

Each June 21, visitors celebrate the summer solstice with wine tasting and dinner at Atwater Vineyards in Burdett. Tour the vineyard before having dinner in a big tent. The winemakers discuss the intricacies of the wines and how each perfectly matches each dinner course.

We hope you enjoyed our New York Travel Guide! Looking to plan your visit? Click here to get started!