It’s a perfect time to try out Atlanta as a place to live, vacation, or work. This city is absolutely renewing itself in the 21st century. Incorporating its beautiful antebellum architecture into the thriving core of a new American city, Atlanta is ready to make you feel right at home.

Atlanta is a city born of the railway. The roots of the city go back to 1836, when a new railroad made the need for a hub inland from the traditional port of Savannah, connecting the eastern US with the growing western territories at the time. Although the city suffered greatly during the Civil War, it rose from the ashes and built a burgeoning metropolis that had one of the fastest rates of growth in the whole of the Americas.

Recent years have brought home the original intents of the city’s founders, as Hartsfield–Jackson Atlanta International Airport grew to be the biggest in the world in terms of passenger traffic. Atlanta hosted the Olympic Games in 1996, and since 2010 the city is one of the most demographically diverse in the USA. It’s known as the ‘city in a forest’ because so many of its streets are named for the full trees that line the streets and lanes. 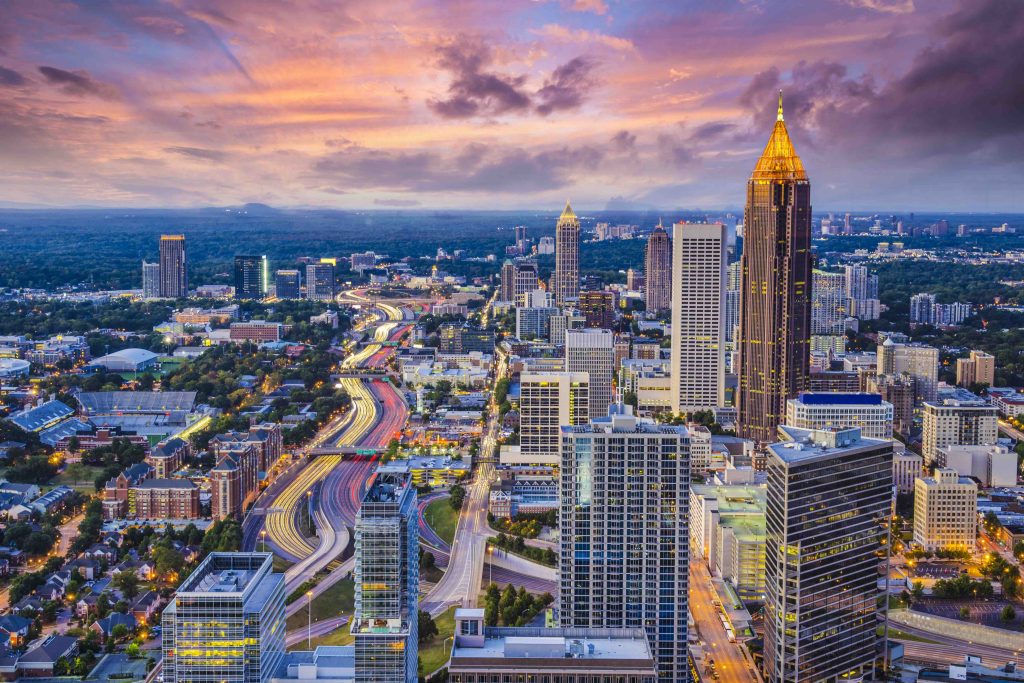 The famous Fourth Ward is a revived part of this vibrant city, which was once home to historical events and even Dr. Martin Luther King Jr. It’s all about yoga, wellness, and eclectic restaurants that serve up excellent eats. A slightly more family-friendly area is the Sherwood Forest suburb, which has great schools and parks for young families to take advantage of.

If you’re into art and love galleries, the Castelberry Hill district is a great place to be. Full of loft living, art galleries, and famous bars, this neighborhood is also home to the Atlanta Art Strolls. You can follow a free, self-guided tour of some of the best art in the Deep South every second Friday.

Midtown Atlanta is a shining example for new cities in the world, and not just in the US. Home to some of the newest condos and bars in the city, this district is also a home base for many in the LGBT community in Atlanta.

If you really just can’t make up your mind based on all the great offerings on Tripadvisor, try out the Inman Park Food Tour. Six stops and food with each.

Noni’s Trattoria is a traditional Italian deli with a lot of options for those who love Americanized Italian fare, as well as many of the plates that make up the cuisine of the homeland. They offer a great cocktail hour with small bites as well as delicious main courses.

Bones is the steakhouse to try out in Atlanta. They offer great grass-fed steaks with superb service, and they have a private room in their wine cellar for tables that need a little more privacy. In a similar vein, one might try out the fanciest restaurant in town for a splurge. Aria is s trendy, world-class restaurant. A recipient of more than ten awards, this is the place for great high cuisine that isn’t too pretentious.

If you’re not in the mood for fancy, Atlanta is a fantastic city. The main dish of choice for locals has always been barbeque, which you can find in any number of awesome local spots. Make sure to ask the natives where to go. We recommend Fat Matt’s Rib Shack for their brain-meltingly good slow roasted brisket.

If you want to keep up appearances that you are on the right side of the moral compass, we cannot recommend Sister Louisa’s Church of the Living Room. It’s a place you can call church, but it’s full of great nightlife and memorable bartenders. It’s also a ping-pong emporium!

The Porter Beer bar is a good local craft pub with eats. Some of the most popular options on the menu include salt and vinegar popcorn, goat cheese fritters, burgers and plenty of delicious beers. For more of this type of food and drink, you could also check out the The Wreaking Bar Brewpub.

If you crave great cocktails, you have to check out the Blind Pig Parlour Bar. This speakeasy-style bar is located in Buckhead Village and decorated in a plush, Victorian-style. You can get there by heading first to the Smokebelly bar, then asking for a place where dreams come true. Relay your password to the unmarked door in the back, then get ready to enjoy some amazing distilled spirits.

Of course, you’ll fly into the busiest airport in the world, Hartsfield-Jackson International. This is an achievement in efficiency and has great transport links to the city center.

Unfortunately, Atlanta grew a reputation for terrible traffic in the early 2010s. This pushed the municipal government to make big investments in the public transportation infrastructure. Currently, the MARTA system is gaining passengers daily and the Atlanta Streetcar loop brings the city straight back to its early roots. Uber and other taxi options are a great way to hop around the center of town.

No trip to Atlanta would be complete without a trip to the World of Coca-Cola. This is a place to sample specialty colas that are only available in the hometown of the world conquering soda. They have more than 100 beverages available for tastings and a food parlor that harkens back to the early days of soda pop.

Visit the headquarters of the global news network CNN, located in downtown Atlanta next to Centennial Olympic Park. Walking tours are held throughout the day and offer visitors the chance to see recording studios and tour the CNN offices. Tickets are $15 plus tax; CNN recommends ordering in advance as tours fill up quickly.

Atlanta is sometimes called “the city in a forest” due to its abundant hills and forested areas. Some of its best parks include Perkerson Park, a 50-acre park shaded by huge oak trees, along with Grant Park, which is the oldest park in the city and is surrounded by a beautiful Victorian neighborhood.

The African American civil rights movement was in many ways based in Atlanta, as the city housed the headquarters of Dr. Martin Luther King’s Southern Christian Leadership Conference. Today, the Center for Civil and Human Rights celebrates that legacy by offering interactive exhibits on the history of Dr. King, as well as the international fight for human rights. Tickets are $21.77.

Worried about safety? Read more about the most dangerous neighborhoods in Atlanta for your family to make sure you have the safest experience possible.